What is Sandboarding? Where to do it?

Just like skateboarding is to the Asphalt, similarly, sandboarding is to the desert. Hold on! Can it be a real thing? Come on for some crash courses to be a master in this extreme sport. Surely, it will help you in bringing out your Tony Hawk with the cacti from inside.

Custom sandboards are the trending equipment for sandboarding. However, you may also come across sledges, skateboards, or surfboards commonly. Unlike snowboarding, you may enjoy this sport for the whole year. Its enjoyment just does not have its confinement to seasonal skiing and wintery slopes.

Snowboarding came into being in the 19th- 20th century. Yet, the history of sandboarding can be traced back to the 1st century mainly because of the populations residing in the deserted places. As a result, you cannot trace back the originator of the sport.

Common perception lies about the creation of this game by the Pharaohs of Ancient Egypt. Hieroglyphics gives a clear demonstration on pottery or wood pieces, of this same idea of the people riding down in the deserts on the dunes. Also, you may find its origination in the areas; Saudi Arabia, United Arab Emirates, Brazil, and Santa Catrina.

Not to forget that sandboarding did not gain much popularity because of the availability of dunes all the time and no safety measures like snowboarding.

Does it have more mainstream in comparison to your thoughts?

Despite counting it in the less mainstream, sandboarding got a considerable and loyal following. It affected society too. There are many parks around the world which offer this sport. Count in the Sand Master Park (Florence, Oregan), Cerro Negro in Nicaragua (the active volcano), and Hirschau in Germany. You will be amazed to know that Germany has the biggest support for this sport. It had the Sandboarding World Championship. It is not the ordinary one but counted as Europe’s largest dune.

Much shine to the sandboarding came through pop culture. Video games have a leading role in it. Any game featuring the scene of desert any sort of boarding will be present. Can you recall any of its recent examples?

The Legend of Zelda (Breath of the Wild) displayed its main character equipped with the shield, using it for sliding in the desert, either with sand seal or gravity. It showed the idea of fast travelling in comparison to the feet.

However, many people agree with adding Sandboarding to the Olympics Sports just like snowboarding. Many argue that despite sandboarding being older, snowboarding got its honour of addition and recognition in Olympics Sports first. So much stress is laid for adding in this international sports event so it can have the attention of new borders and create its awareness among people.

To sum up, in a few words, Sand boarding is a bit dangerous yet fun-filled activity that is not just part of deserts. Next time you plan for a beach trip, you can spice it up with the Sand surfing. What real fun to enjoy winter like thrilling sports (snowboarding) in summer even?

Wanna enjoy sand boarding? Check out the best desert safari tour which includes the sand surfing and much more. 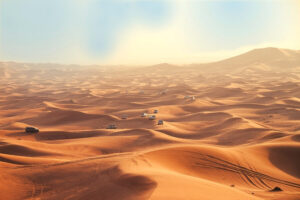 5 Deserts of UAE You Should Know About

The United Arab Emirates (UAE) is home to some of the very vast sandy deserts. The deserts are an attraction for tourists all over the

Things To Do In Creek Park Dubai

If you are thinking about to have perfect outdoor fun, so Dubai Creek Park is the perfect spot to go. It is located on the

We have made it easy